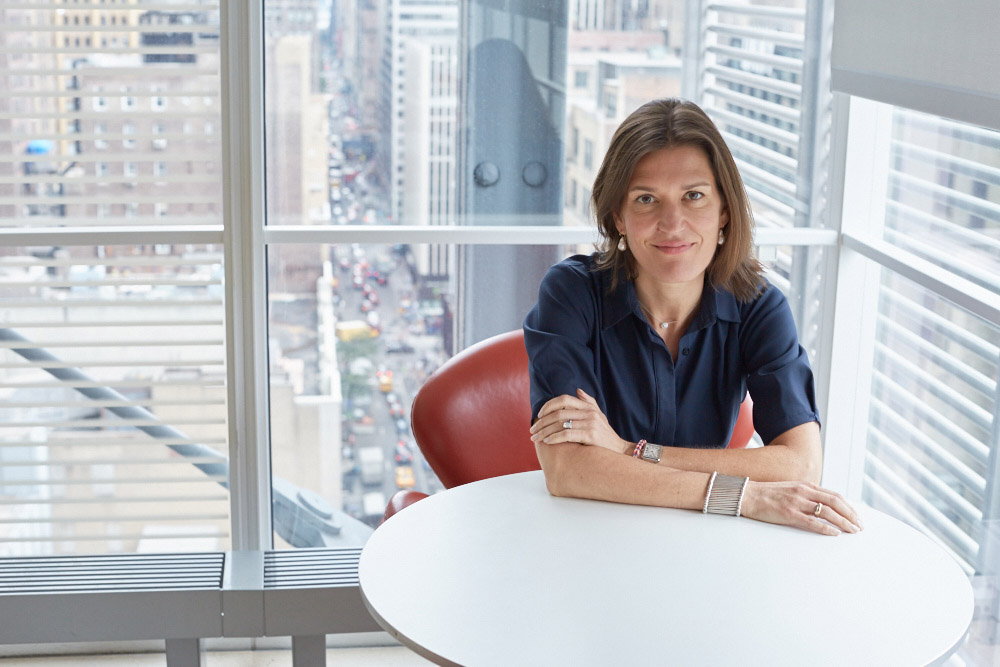 Maybe inclusion starts with a story

Award-winning New York Times correspondent Kate Zernike will speak about ‘women in science’ for the 2019 Lustrum celebrations. She thinks stories can make us more inclusive. ‘At the heart of everything is a human story.’
By Megan Embry

The Zernikes are no slouches; achievement is in their DNA. Famous Dutch physicist Frits Zernike won the Nobel Prize in 1953 and the RUG named an entire campus after him in 2014. One of his sisters was a celebrated novelist and another was the first ordained female minister in the Netherlands. Amazingly, Frits isn’t even the only Nobel Prize winner in the family. His great-nephew is one, too.

His granddaughter, Kate Zernike, is impressive in her own right. She is a New York Times political reporter, an author, and a member of a 2002 team of journalists who received the Pulitzer Prize for explanatory reporting after 9/11.

‘Growing up, I don’t think anyone ever said, “You have to go win a Nobel Prize”’, she laughs, ‘but we were all raised to believe that we had to make a contribution to society. There was definitely a sense that this family did things that were important.’

Even though Zernike’s father emigrated to the US after WWII, Groningen figures large in her sense of self. ‘My father grew up in Groningen, and I grew up listening to him tell stories about it. I have family there, and when we come to the Netherlands, we all tell stories. So  it’s a pretty big part of who I am.’

She will take the Lustrum stage this Friday, June 7 to talk about women in science during the celebration of the 100th Rosalind Franklin Fellow. She will share what she has learned about inclusion from her latest book about the ‘MIT sixteen’, a group of female physicists at the Massachusetts Institute of Technology who fought against institutionalised gender discrimination. ‘Their story is really the story of women in science, even today.’

Zernike believes in the power of stories, and she wants the world to hear women’s stories. So we started by asking about her own.

Your grandfather and your father were both physicists. How did you decide to become a journalist?

‘My father’s stories probably made me a journalist. My two older brothers and I used to love his stories about life during the Second World War. We always promised each other that one day we would stick a tape recorder under the table.

His stories were of a childhood overlaid with a huge international crisis. Watching the Nazi occupation unfold through his eyes was so incredible to me. It really showed me that at the heart of every monumental thing is a personal, human story. I often say that my father taught me the poetry of everyday life.

My family was worried that the Nazis would come take my grandfather and make him work for them. So he would sleep somewhere else at night, often with a family friend who was a baker. In my father’s retelling of it there is this dark, imminent danger – but what he remembers most is dropping his dad off for the night at the baker’s and getting to lick whipped cream, which was of course very rare during the war in Holland.

My father taught me the poetry of everyday life

He also remembers his mother listening to a radio, which she wasn’t allowed to have. The troops were pushing into Austria, and my father was clanking around in the bottom of a jam jar with a knife, trying to get at the last of the jam – which is something I also do. And his mother is shushing him: ‘Quiet! I have to hear this!’

I find that very personal retelling of major historical events so intimate and compelling. I think often, in dealing with each other and even in reporting the news, we forget the human side. We forget to think about people as people or to stop and wonder: what is their story? What do they bring to this encounter, this conversation, this debate, this crisis?’

The book you are working on nicely marries your history of storytelling and science. What inspired the project, and how does it unfold?

‘It started with a story that I did in 1999 when I got a tip that MIT was going to acknowledge that it had discriminated against its female faculty for years. I already knew the topic was interesting, because my father had told me stories, as a physicist, about being in rooms full of men and not a single woman.

MIT hired a group of women in the early 1970s when there was a big push to hire more women. These women didn’t think of themselves as feminists; they just assumed that once they got the job they would be respected like any other scientists. They thought that if they kept their heads down and did the work, they too could win a Nobel Prize.

One of these women, Nancy Hopkins, kept her head down for nearly twenty years. There were a lot of professional slights along the way, but she always thought, ‘this couldn’t possibly be related to my gender’. Finally at a certain point, her progress was just blocked. She asked for more lab space, and pointed out that the men had more space. Her directors were like, ‘don’t be ridiculous’. So she went in late at night and measured the floor. And indeed, she had less space than the men.

The problems for women in science have not gone away

Nancy and one other woman she knew decided to survey all the other women at MIT. It didn’t take long to find them; there were only fifteen women in the school of science, compared to about two hundred men.

The women realised they all had the same stories, the same problems. So they got scientific about it and looked at the data: salaries, grants, pensions, lab space, office space, all of it. And they realised that women were getting less of everything. And none of them had ever taken maternity leave because they were afraid it would be held against them, though some of the men had taken it.

It took five years, but MIT finally came around and acknowledged that it had this institutional problem. MIT fixed the money disparities, added daycare centres, encouraged people to take maternity leave, and stopped the tenure clock so that women who had to take a break to have children could do so.

What was interesting about the MIT story was that it wasn’t blatant discrimination; it was very subtle. But what they did was clearly say: this, too, is discrimination. And what has brought me back to this story all these years later is that the problems for women in science have not gone away.’

The academy, like journalism, struggles to retain women at the highest levels. The RUG has tried to make gender diversity a priority, but only about twenty percent of its professors are female. What do you think is missing from these spaces that might prevent women from leaving or being pushed out?

‘That’s why I really like the theme of this conference. To my mind, ‘inclusion’ is about more than just hiring people – though that is a huge part of it. Women need to see other women. But it’s about embracing people.

What the women at MIT kept saying was that they wanted to be included, not just tolerated. And there is a big difference. Without women in the administration, the women who were there were being overlooked. There was one amazing case where a man complained at a meeting that it was ‘too bad no one from chemistry is in this committee’. But there was; a woman. He hadn’t noticed her.

This is also something that I think women in the mid-and-senior parts of their career have long felt, in any field. There is a sense that women fade. When you’re young and hot and smart, it’s sort of cool for you to be there. When you’re a competitor, it’s not so cool anymore – and you’re not young and hot.

So what should universities do? Start by really including women – investing in them, acknowledging them, calling on them in meetings. That’s the first thing.’

A lot of the young women at the RUG tell me that it’s not enough to see other women in positions of influence, they also want to see that their lives are worth having. They want to know, honestly, what is behind that success? How much will having a family be treated like a professional liability? Will the sacrifices I would have to make be fair – equal?

‘I think we need to talk about this a lot more without being punitive. I am raising two young children, and it is hard. My own mother, who also worked, told me early on, ‘You’re going to be paying to hold your spot in the workplace’. And that’s true, at least in the United States. Maybe it’s better in the Netherlands. We had a full time nanny when my kids were young. Obviously many women cannot afford that.

But I have to say, I think the notion that children are the reason that women aren’t succeeding isn’t true. Half of the ‘MIT sixteen’ didn’t have children. So I think it’s a red herring to blame the kids. And while you’re right – young women want to be able to have a career and families – they aren’t the only ones. Men also want that.

So we have to bring men into this discussion too, and have them say, ‘this is something that I want.’ We have to realise there are going to be sacrifices, look for flexibility where we can, and encourage our employers to be flexible too. Men and women will have to work together in the workplace to make that happen.

There is also this prevailing idea that people have to turn over their whole lives for an academic career. Maybe that’s true now, but then we really have to reexamine this model that says everyone has to work all the time.’

We’ve spoken a lot about gender inclusion. The university also seems to focus its diversity efforts primarily on gender, ethnic minorities, sexual preferences, and religion. But given your extensive writing on the American Tea Party movement in the past, how much importance do you place on making ideological inclusion a priority in elite intellectual spaces – like the New York Times, or the RUG?

‘I think we need to have diversity of all kinds. I guess the thing that frightens me about the question of ideological diversity is the question of tolerance. What I worry about are the instances where someone – liberal or conservative – can’t speak on campus.

That brings us back to what I said before: we so often forget to see people as people instead of as labels. We bring our assumptions first, without seeing where that person is coming from, and often in a rash and heated way.

One of the things I was trying to do with that tea party book was to give people a way to understand ‘the other side’. I felt like you couldn’t completely discount what these people were saying. They may have been misinformed, you may have disagreed with them, but they were out there and they were influencing policy.  We needed to understand why they believed what they believed.’

Kate Zernike will be speaking at the Academy Building on Friday, June 7 during Lustrum programme session 3, 14:45 – 17:00