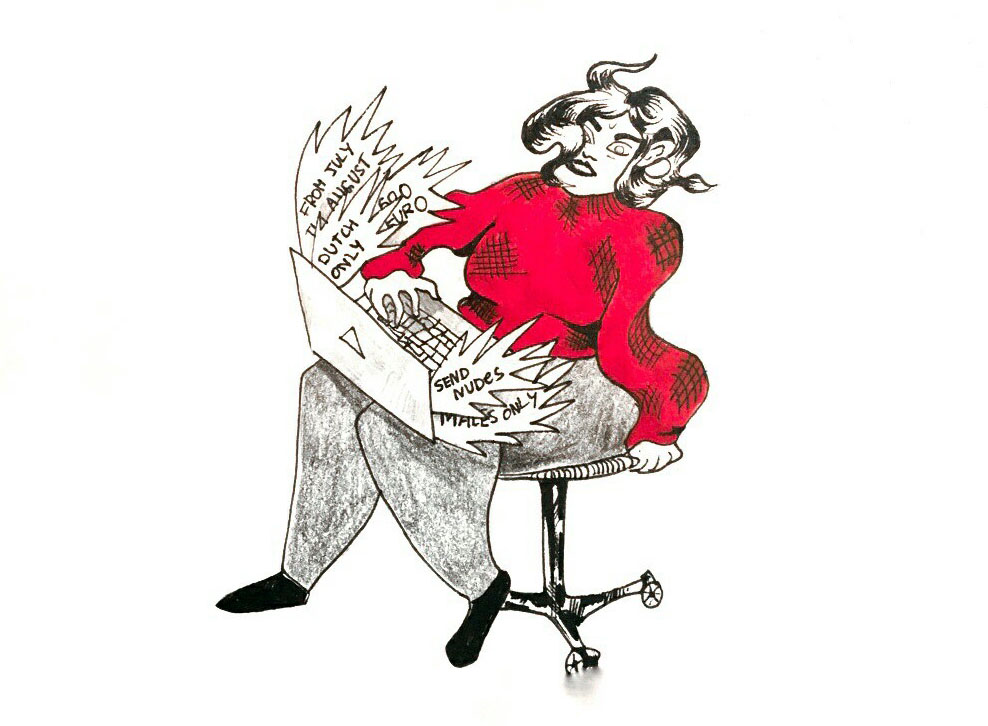 Desperately hunting for a room

Is the panic over rooms overblown? The UKrant followed three international students from Germany, Russia, and Brazil as they searched for a home. This week, they all found rooms.
By Megan Embry / ILLUSTRATION by Ksenia Anohina

Anxiety is contagious, especially on social media. And judging from Facebook, international students are really anxious about finding somewhere to live in the new academic year. The RUG insists the situation is under control. But no one will know for sure until all the students are on the ground – maybe literally sleeping on the ground – in September.

Ukrant.nl decided to keep tabs on three international students hunting for a room: what obstacles do they face? What could the university do for them? In the past weeks our international pilgrims have traversed frustration, despair, and misadventure. But as of this week, all three have found a place to lay their heads.

For German student Annick Krywuczky, the hardest thing about finding a room in Groningen is the never-ending uncertainty. ‘I’ve spent so much time on my phone and computer’, she says. She hasn’t been able to think about anything else. ‘I’m the kind of person who wants to manage things as soon as possible.’

The RUG advised students to begin room searches early. And while it’s true that waiting until the last minute might land you in a tent in the Stadspark, it’s also true that ‘starting early’ only does so much good. Krywuczky says it mostly just made her feel panicked – before June almost everything listed online was for working adults, anyway.

The university sent an introductory web presentation to incoming German students, but it didn’t tell her anything she hadn’t already learned from Google. ‘So it didn’t feel like support. I just got even more stressed from watching the video.’

But after reaching out to nearly 100 people on Kamernet and over a dozen on Facebook, Krywuczky finally managed to get three room viewings. She planned to make the three-hour drive to Groningen last Thursday.

Then, late the night before, two viewings were canceled. ‘I was so, so frustrated. I cried’, says Krywuczky. ‘It took me so long to get those appointments. I’d been stressing over this for weeks, and now I had to decide if it was even worth it.’ In a final desperate attempt she got back on Kamernet and somehow secured one additional viewing.

Krywuczky knows her proximity to Groningen is a major advantage. Most international students have to woo potential roommates from Skype. Her last minute-viewing turned out to be ‘the one’ – ‘but I don’t think I would have gotten that room without visiting in person’, she says.

Krywuczky will have a roof over her head and a respite from worry until January, when the original tenant returns from her studies abroad. Then the search will start again.

Advice from Annick:
‘Don’t spend money on housing websites. I signed up for Clawq, but everything they sent me was useless. I basically paid 11 euro for nothing.’

When Brazilian student Felipe Silva’s face pops up on the screen, the first thing you notice is his grin. He’s somehow instantly likeable. He’s had a lot of practice making a good impression, he says: fifty-four witty messages and six Skype interviews, to be exact. ‘That self-promotion you have to do to get a response – I had to train myself to do that.’

Silva is coming to Groningen on a UMCG scholarship to do his masters in medical and pharmaceutical drug innovation, and has been searching for a room since the first week of May. He has studied abroad before – in California – and that experience was much easier. ‘The university facilitated the entire process; they helped a lot more.’

The hardest thing for international students who live really far away is the money. ‘Rooms are offered starting from June or July, but internationals usually can’t come until August or September. If you want to secure a room you can end up paying so much extra.’

For Silva, this is impossible. ‘The Brazilian currency is four times less valuable than the euro. It’s really hard to gather all that money. My salary is not that good!’

Happily, he has just landed a room in a student building, covering the rent for another student who is going abroad until January. He will only have to pay extra for the last half of August – but that money has to come from somewhere. ‘I’m selling my motorcycle so I can pay for the deposit and my plane ticket.’

Silva considers himself lucky. ‘I’m the opposite of what everyone is looking for – a broke, Latino, male student. I’ve never wanted to be a Dutch girl so bad! But it worked out.’

Advice from Felipe:
‘Don’t treat a Skype interview like a job interview. Try to be cool, make jokes, and show your personality. Also, having international experience helps – so play that up if you can.’

Ksenia Anohina is coming to Groningen to study at Minerva Art Academy. A sketch artist, she keeps a visual diary to process her emotions. Searching for a room from Moscow has given her a lot of material, she says. ‘It’s so weird and discouraging.’

There is a fine line between being ignored on Facebook housing groups and getting the wrong kind of attention. ‘I’ve had a lot of people ignore my posts – nothing, just silence. Then I found if you post a photo, people are more willing to respond. But there are also a bunch of dudes who will write you weird stuff.’

In one instance, Anohina was hopeful she had found a room below her budget, at only 200 euros. But then the owner asked her to send a photo of herself. ‘Like, my whole body – along with my height and weight’, she says, clearly grossed out. ‘I got really angry. He didn’t understand what was wrong. He just said, “It’s not like I asked for nude photos!”.’

Because Anohina is only seventeen, she won’t be able to get her VISA and move to Groningen until she turns eighteen at the end of August. She’s worried that’s too late. When she emailed the RUG for help, they directed her to SSH – which had no vacancies and was significantly more than she can afford.

Desperate, she almost agreed to rent a room in a small bachelor apartment with a single working man who was dodgy about his age. In the pictures he sent, her bed was tucked into the corner of the kitchen; he would sleep on the couch. ‘It’s my only option’, she wrote Ukrant.nl, ‘but I don’t know where to study and I’m scared of living with a grown man.’

We responded: ‘DO NOT DO THAT.’

‘The most accurate representation of my feelings at that point was just – hysterical laughter’, she says. ‘I’ve been through anxiety, confusion, panic, sadness, and disappointment. Now it’s just entertaining.’

When she finally resigned herself to tent-shopping, she was offered a shared room in SSH for a year. She jumped on it, stranger for a roommate notwithstanding. ‘The rooms are huge, so it’s fine’, she laughs, ‘I’m not picky.’